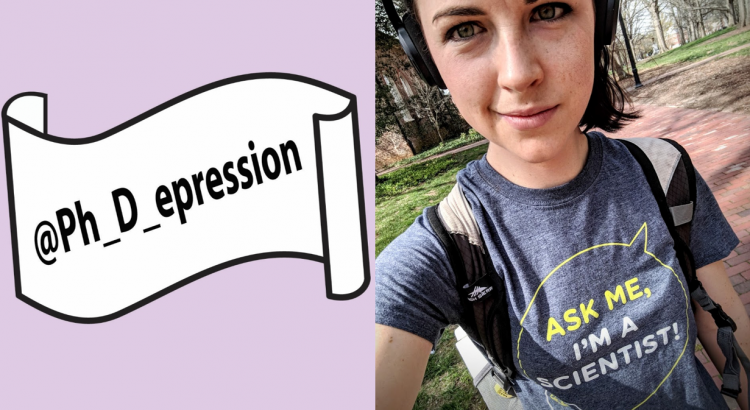 The study’s authors highlight the fact that poor work-life balance was a contributor to student mental illness.  They also noted breakdowns in the mentor-trainee relationship that exacerbated the issue.  Finally, they highlight the uniquely challenging circumstances of transgender students, gender non-conforming students and women, who are “significantly more likely to experience anxiety and depression than their male graduate student counterparts.”

They suggest a menu of changes to graduate training, including increasing access to mental health resources, training mentors, and modifying the culture of research to improve work-life balance.

But those solutions will likely take years to understand and implement. What’s to be done for students who are suffering today?

Susanna Harris had read the statistics, and she knew there must be other scientists around her that wrestled with the same feelings she had, but where were they?  “You can’t see mental illness on somebody – it’s not a stock photo of a girl wiping away tears,” she notes.

So she decided she’d go first – to tell her story in a public way so that others who were also struggling could find comfort, acceptance, and inspiration for their own journeys.

She launched a social media community on Instagram under the handle @Ph_D_epression.  Students and scientists post an image of themselves, along with a personal story describing their experience with mental health.

“Our goal is that PhDs and students feel comfortable discussing and seeking help for mental and emotional health in the same way as they do for maintaining physical health. We want to disrupt the cycle of secrecy and shame through sharing and discussing personal struggles with mental health issues.”

As contributors share their stories, they receive back a flood of comments offering support, encouragement, and thanks.

“Love you for this honesty!! You are awesome!” wrote one commenter.  “Thanks for sharing your story 💕I’m sure your testimonial will help many people. The stigma has to end, too many people suffer in silence and unnecessarily,” added another.

The community has expanded to Twitter and Facebook as well.  Find them at https://www.instagram.com/ph_d_epression/,  https://twitter.com/Ph_D_epression, and https://www.facebook.com/thephdepression/ where they encourage you to share your own journey.  “We’re looking for people to connect and to support people, and this project is about decreasing stigma and increasing conversation.  So if you know anyone who has been vocal about their own struggles, we are always looking for more stories.”

“You don’t have to wait for a breakdown to take care of yourself,” Susanna concluded.  “You’re absolutely not alone.  It doesn’t have to be this hard… Get the help or support you need!”

As the “Laurel or Yanni” wildfire slowly burned itself out, we found the last person on earth who hadn’t heard the sound file: Josh!  We manage to recreate the illusion, and explain the science behind the magic behind the nonsense.  Hear both versions on the New York Times interactive website.

For ethanol, we share the Dragon’s Milk Bourbon Barrel Aged Stout from New Holland Brewing in Michigan.  It’s a dark and heavy brew to slowly sip from your fanciest glass.  Just don’t ask us where dragon’s milk comes from…

One thought to “093: The Grad School Mental Health Crisis, and What You Can Do About It”