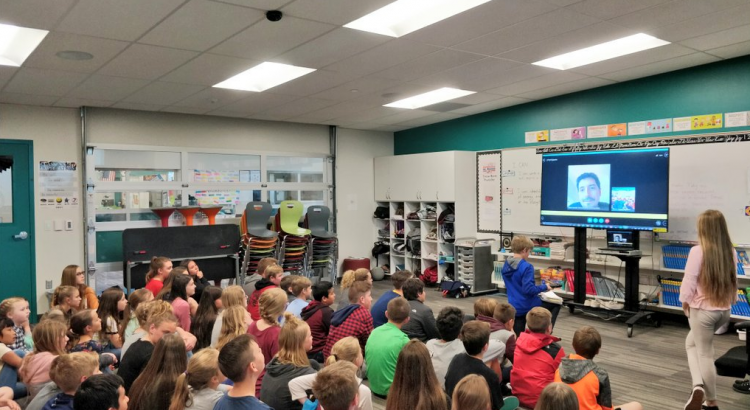 “I was observing that there was this growing mistrust in science, and I couldn’t really understand why. I think that people just don’t trust scientists anymore, or at least not as much as they used to.”

As a graduate student at the University of Connecticut, Sarah McAnulty was struck by the anti-science and pseudoscience she saw in the news and in friends who trusted their internet-inspired juice cleanse more than they trusted medical research.

“It’s discouraging to see them not trusting us as a group, so  I looked to see where people could access scientists in their daily lives.  It looks like most of the pop culture references they have for us are either evil or socially awkward.  And even when scientists have noble intentions, you end up with Jurassic Park!”

Sarah looked for a way to change that perception by connecting real-life researchers with the general public.  But most science outreach formats attract participants who are already open to learning.

“If you’re blogging or on Twitter,” Sarah observed,  “you’re attracting a group of people who are interested in science in the first place.  Where in society do you have a basic cross section of the whole culture?

Then it hit her. “I thought school would be a good place to start.”

In that moment, Skype a Scientist was born.  The program connects active researchers with classrooms and other groups around the globe, allowing scientists to introduce the public to their work.  By ‘meeting’ a real-life scientist,  the session can repaint a student’s mental image of a scientist from stodgy old man in a dusty laboratory to a more exiting reality: a person who may look a lot like them.

“Now we got to libraries and book clubs and knitting groups – anyone who wants to sign up can do that.”

In its very first year, Skype a Scientist connected 400 scientists with 800 classrooms.  This year, they’re aiming to reach 10,000 classrooms, and they’re well on their way.

“In the last couple of years, there’s been a lot of energy and [scientists] don’t really know what to do with it,” Sarah observed. “They want to help, but they’re not really sure what to do.”

“Skype a Scientist is the easiest thing you could do to give back and communicate with nonscientists,” she says.  “You don’t need to totally establish a new outreach event from the ground up. You just sign up and it’s pretty much done for you.  It takes an hour of your time and a couple of emails.”

Asked about the most surprising or rewarding part of the program, Sarah noted, “Helping scientists show their personality while talking about science is something that I’ve found super rewarding.  The amount of effort that I put in and seeing the result that comes back, there’s a higher reward per unit energy that comes out of this kind of work.”

And perhaps that’s the real magic behind Skype a Scientist: revealing the personalities behind the papers, and demonstrating that a career in science can be exciting, inclusive, and impactful.

If you’re not sure you’re ready and would like to see other scientists in action, check out a Skype a Scientist Live session. Sarah will talk about her work with squid on September 4th, 2018, or check out other live sessions covering topics from sharks to volcanoes!

Last but not least, we sample the Hopulent India Pale Ale from Epic Brewing in Salt Lake City, Utah.  Thanks again, Matthew!

And we discuss Hawaii’s upcoming ban on certain chemical sunblocks that appear to harming coral reefs. It’s a case that highlights the variety of approaches countries take to chemical safety for people and the environment.

One thought to “099: Skype a Scientist with Sarah McAnulty”