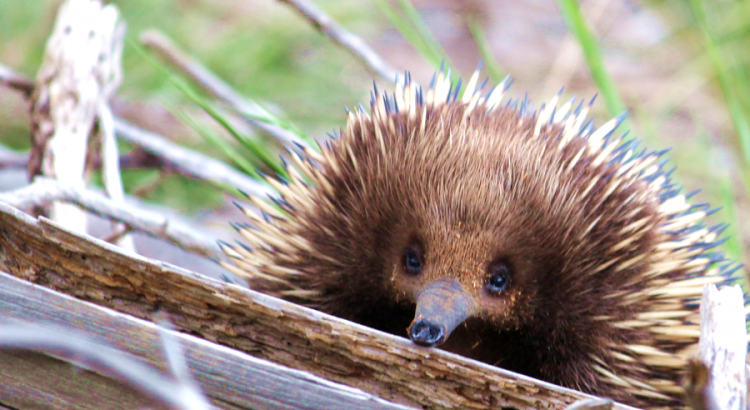 It looks like a cross between an anteater and a hedgehog, but don’t let that description fool you into believing it’s easy to spot an echidna in the wild. These denizens of the Down Under know how to hide.

“They’re really understudied in Australia because they’re hard to find in the wild,” says Tahlia Perry, a graduate student at the University of Adelaide who has staked her graduate career on studying these rather shy creatures.

“If you do find one you might not see the same animal for a couple of years in the same area. Even if you do put a tracker on them, you sort of know they’re in a couple of meter radius around you but you still can’t find them because they’re really good at hiding and they just disappear into the soil.”

Tahlia’s project aims to understand more than just the distribution and habits of the echidna; she’s studying the foods they eat, their hormone balance, and their microbiome.

And for that, she needs to collect echidna scats (i.e. poo!) for analysis in the lab.

It’s difficult to generate enough data to finish a PhD with just one or two echidna sightings a year, so Tahlia and her team had to think bigger.

They developed an app called EchidnaCSI that users across Australia can download to their phones to participate in the project.

EchidnaCSI allows citizen scientists to snap photos of echidnas they see around the neighborhood or in the wild. Those photos are uploaded to the University’s servers with date and time information, as well as the phone’s geolocation, giving Tahlia vital data about where, and when, echidnas can be found across the continent.

To understand the food choices and microbiome of these creatures, the app-participants can contribute in a slightly less orthodox way…

“I’m getting the general public to basically collect echidna poo for me from across Australia,” Tahlia summarizes with a laugh.

But the value of average citizens dropping poo in the mail is anything but laughable. Tahlia’s team can use those samples “to tell us who that echidna is, if it’s healthy, stressed or reproductively active. And so we can learn more about these wild populations without having to track or capture any of these animals.”

And that’s the point – pun intended – of EchidnaCSI. It stands for “Echidna Conservation Science Initiative.”

When we met Tahlia, she was attending the Citizen Science Conference, where nearly a thousand scientists, teachers, students, and enthusiasts met to talk about the ways that valuable research is assisted by curious and engaged citizens.

Tahlia sums up the problem, and the solution, perfectly:

“There is no way I’d be physically able to do it myself. Even with a team of scientists there’s no way we’d be able to collect this many sightings, this many scats, or go to these sorts of locations. The budget alone and the time alone – I would be doing this for the next 40 years of my life if I wanted to get this information. So that’s the power of citizen science.”

This week, we set aside our deep, pervasive fears of sour beers and sample a hand-selected Gose sent in by listener Adrian. It’s the Tritonia Gose from Creature Comforts Brewing Co. in Athens, GA.

Unlike some other sours we’ve tried that just taste like someone left a beer open in the sun for too long, this one combines hints of cucumber with a sprinkle of salt, making the whole concoction taste like summertime at the ocean.

It’s the first sour we’ve tried that we want to try again. And maybe one or two more times after that!