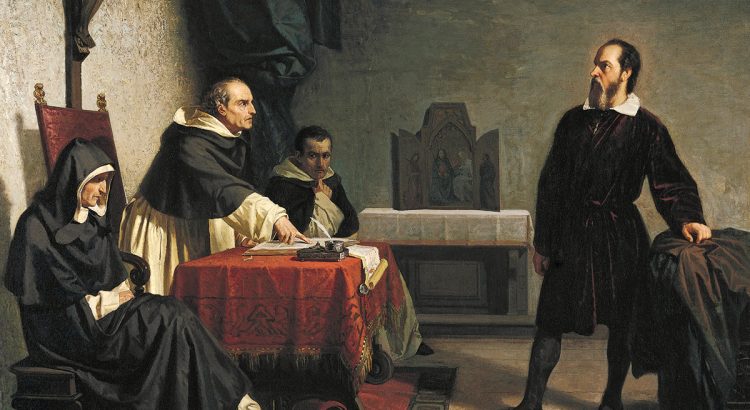 Galileo was an Italian astronomer, physicist, and polymath who lived and studied in Italy around the turn of the seventeenth century.

He may be best known for an experiment that he probably didn’t actually do – the apocryphal tale of Galileo dropping different objects off the side of the Leaning Tower of Pisa to see how they would accelerate.

But Galileo’s astronomical observations, and the conflict they produced, take center stage in Dr. Livio’s new book. It’s a story that surprisingly few people have heard.

“Galileo is one of the most fascinating personalities in history. While everybody has heard about Galileo, I discovered that very few people actually know exactly what happened to him,” Livio recalls.

The book begins as a straightforward biography, describing Galileo’s early years, studying and teaching at Universities around Italy. But as the chapters progress, the reader begins to pick up on the faint but steady drumbeat of Galileo’s impending battle.

Dr. Livio sets the stage: “Aristotle and Ptolemy had a geocentric model of the solar system, in which the Earth was at the center and everything else revolved around the Earth. And the Catholic Church, over the years, adopted this particular model as its orthodoxy.”

“Copernicus changed that by suggesting that the sun is actually at the center, and the Earth and all the other planets revolve around the sun. And that’s where Galileo enters the scene.”

The book describes Galileo’s astronomical observations that built a case for the heliocentric model of Copernicus. The reader gets to follow along on this path of discovery, observing Galileo as he observes the Phases of Venus, or spots circling the sun, and draws new conclusions about the position of our planet in the solar system.

The Road to Rome

But inevitably, Galileo’s research and writings come to the attention of the Church, and his trajectory is locked on a path toward conflict with Pope Urban VIII.

Through a series of Papal threats, legal injunctions, and a three-phase trial that reads like the script of an episode of Law & Order, Galileo is found “vehemently suspect of heresy” for asserting that the Earth revolves around the sun.

He must choose between recanting these views or being labeled a heretic – a title that would lead to his torture and death.

Nearing seventy years of age, Galileo kneels before the Cardinals and recants. He is placed under house arrest for the rest of his life, and is forbidden from discussing or teaching those heretical views.

And Yet it Moves

It’s a compelling story of injustice and the struggle for intellectual freedom, but that’s just part of the reason Livio chose this subject at this time.

He says, “This is why the book is called Galileo and the Science Deniers. Science denial did not disappear from the world. Unfortunately we are facing it today in full force. And we are facing it in various areas.”

We talk about climate change denial, the teaching of creationism in science classes, and the international response to the COVID19 pandemic.

In each case, scientists are forced to compete with other, louder voices arguing for competing solutions from the standpoint of economics, religion, political gain, or just plain opinion.

The story of Galileo’s struggle to speak truth to power seems all-too-relevant today. And perhaps, he has some lessons for our times.

As we weigh our options in this era of accelerating climate change and a pandemic killing tens of thousands in the US alone, Dr. Livio concludes this way: “It is never wise to bet against science.”

One thought to “133. Galileo and the Science Deniers – with Dr. Mario Livio”